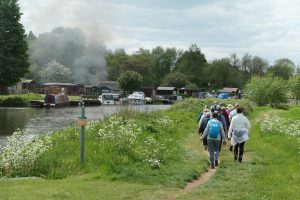 Sadly work commitments meant I was unable to participate in this walk but I am delighted to have been sent the photographs and with no one else having written up a commentary I guess it is once more down to me to interpret what our intrepid band had to contemplate as they ventured forth.

And indeed above we see the backs of some of the ensemble making their way along a footpath, but clearly at once we note that this is dangerous territory, for if you inspect the top left of the picture you will see grey shapes above the river.  I can only take these to be the opening salvoes of an erupting volcano which I am sure our walk leader was at this very moment pointing out to the ensemble as they moved along the path. 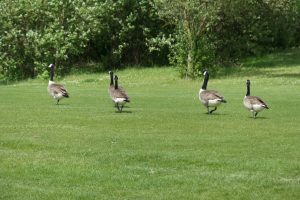 And clearly this arriving explosion from the bowels of the earth, for which of course the Peterborough region is justly notorious, meant that even the wildlife felt it was time to leg it (as it were) and make haste for, if not the hills, then at least the bushes. 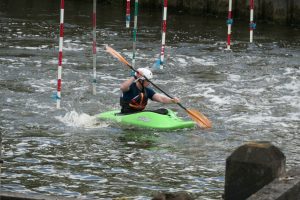 Such was the deep concern about this eruption of this well known event (which was sadly not mentioned on the local radio stations)  that all modes of transport were utilised in an effort to get away as fast as possible. 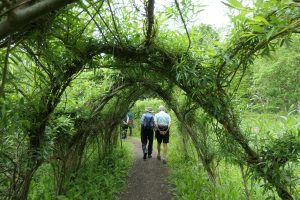 But eventually escape was secured from the tumult and our merry band entered the safety of the world-famous Peterborough Rainforest, here seen on one of the few occasions on which it was not actually raining.  Notice the speed at which the undergrowth is growing. 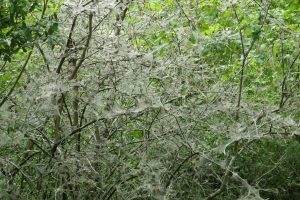 And here we can also see that within minutes completely new life forms have emerged from the depths of the underground explosion, and are even now spreading out in all directions.

Remnants of several walking parties who have previously walked this way but without the care, consideration and preparation for which Peterborough Ramblers are justly famous were to be found along the way but of course it would be utterly disrepectful of our photographer to take pictures.

But our merry band saw the infamous man-eating grey plants of Thorpe Park, and avoided them. 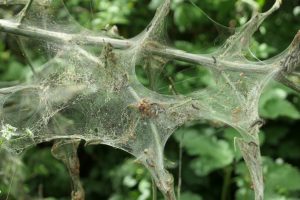 However not all life forms were so lucky as above you can see the remains of a previous walking party that did not take the meticulous care and preparation in heading for walks, for which Peterborough Ramblers are justly world-famous. 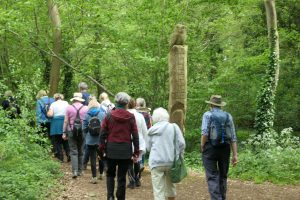 The patrol of newly evolved life looked on approvingly as our team marched on undaunted through the undergrowth, anxious to see what was left of civilisation once they emerged from the safety of the forest. 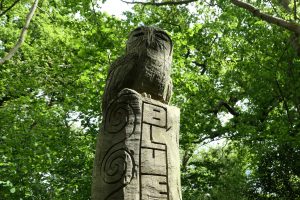 And all the while the Guardian of the Gate, looked on approvingly, his magic symbols foretelling the date and time of the next explosion with an accuracy at which mankind can only marvel.

Of course, we are already planning the next walk in the region and bookings will soon be open.

But a word of caution.  If you tell friends and relatives about the extraordinary events witnessed here they might not believe you.  This is of course part of the propaganda system organised by estate agents in a desperate attempt to keep house prices rising.

If anyone is kind enough to take pictures of the next walk, and then does not provide a commentary to go with them, I shall endeavour to fill in the gap once more.

Thus until next time….