It was a smaller than usual group – presumably due to the threat of further rain – that ventured out on the Orton Mere walk – which is a shame because it is a remarkable walk, and in many ways thoroughly unexpected (at least for me).

First, (and this will only be surprising for anyone who knows it) the fact that the city of Peterborough and its rural environment seem to merge so seamlessly, and second because of the extraordinary sculpture that we found.

Being a heathen from foreign parts (Northants) I had not really taken on board just how extensive the Peterborough Sculpture Park is – and to come across one of its exhibits out of the blue like this really was quite something. 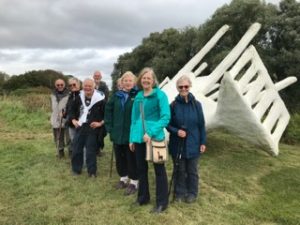 We were also lacking our usual photographer, and Jane kindly stepped in with these two pictures here – I guess with this second one there ought to be an album with a collection of Beatles songs attached. 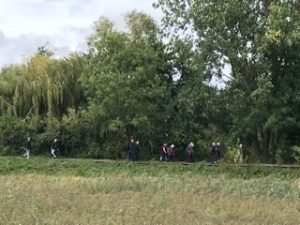 But to return to my impression: I really don’t know Peterborough particularly well – I have been shopping there a few times, visited the out of town theatre for some excellent shows, and been to the football ground a few times – but this walk gave a totally new perspective of just how the city and the countryside flow into one another, and indeed how the Nene ambles its own chosen route through the city just as it does across the countryside.

And walking along the river bank made me conscious of just how little I know about it (as indeed with many other parts of the area).  So, just in case you don’t know, the Nene is the 10th longest river in the country, starting out of Arbury Hill, and ending up in the Wash.  The final 88 miles are navigable.

My next trip out is to go and find the source.

And as a PS just in case you don’t know (and I say this only because it took me a long time to realise) there are a number of Ramblers walks shown in detail – with maps – on the Ramblers.org.uk website.  You have to be a member to be able to access the site, but if you are a member and haven’t used it, and fancy striking out on your own, I’d recommend taking a look.   On the website look for the “Where do you want to walk” box on the left side near the top.

The Bulwick Walk in pictures