There are three fundamentals to a Peterborough Ramblers walk.  The first is the natural world of plants and animals.   And these are usually to be found a-plenty hither and thither.

Now as an urbanite myself I found this distinction between the two a little unsettling at first but gradually it became clear.  The plants don’t move and the animals do. 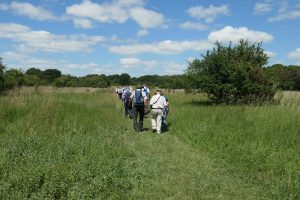 Which pretty much sorts it all out until such time as we come across any triffids.

I have enquired as to the likelihood of this but it seems that they have not been spotted in the green fields of Cambridgeshire, nor even on our occasional ventures in Northants and Rutlandshire for several weeks.  So on this issue I shall have to remain silent for a while. 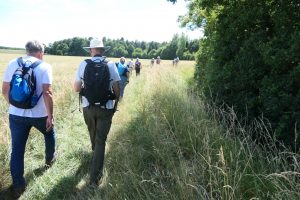 And so the second fundamental: and this is that Peterborough Ramblers always walk away not toward.  It is an important distinction between ourselves and other beings on the planet and one that should be remembered at all time.

Then finally we come to the signs. 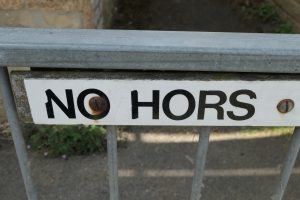 Signs are important because they tell us things.  Although quite what those things are I am often not sure.

For example on the sign below “No hors” – what exactly does that imply?

After considerable examination of the evidence I believe this comes from the ancient Cambridgeshire phrase “Hors de comb at” which means that one is apologising for the look of one’s horse as it, poor thing, has not had a chance to attend to his or her mane. 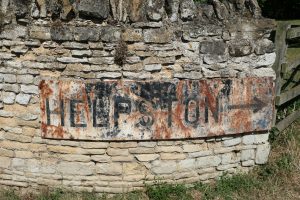 However, I am told that other definitions include something to do with jumping from a military aircraft with a parachute, after the plane has been hit.

The other sign “Helpston” is easier to comprehend.  The first clue is at the end with the letters “ton” which is the Anglo-Saxon for town.

From this it might be gathered that the whole message is that help is available in the next town, but this would be an error.  For it turns out that “helps” is mediaeval code for water buffalo.

I hope you found that helpful.

The Manton Walk in pictures and words