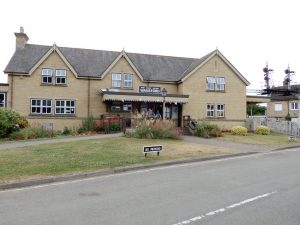 This set of pictures continues from the Wansford Walk Part I which you can reach via the link, and which took place on 30 Jun 2022.

I think the point illustrated by this set of pictures is very much that our walks are not just hikes across farmland and the like, but also take us past elements of the area’s history.

And for people like me who are not that familiar with the countryside in this part of the world, there are always surprises. 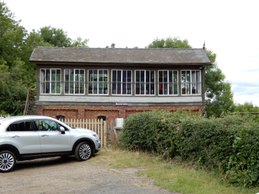 At one moment there is well-maintained station ticket office for a line that is, I believe, no longer in daily use as a mode of transport in terms of getting from A to B, or even C, but nevertheless is well maintained and used as a tourist attraction as part of the local railway.  (I will of course be corrected if I am wrong – emails to Tony@schools.co.uk) 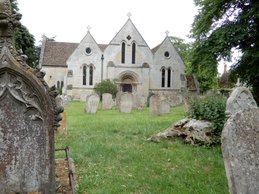 But then we find a completely abandoned signal box, presumably either not deemed worthy of restoration and maintenance or perhaps a building for which funding has not been found to restore it to its former glory.

It does indeed make me wonder if buildings of today which are gradually found to be of no use anymore (one may think of shops in certain deserted high streets) are equally being just left to decay, until one day someone thinks that they are worthy of restoration.

And contrast such thoughts with the churches and graveyards that we pass – seemingly one or two on every walk we do. 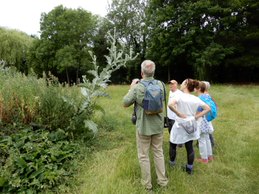 The gravestones may be tilting a little, but there is still normally concern and dedication being directed at the memory of our ancestors, even when it is no longer possible to read on the stones who the departed were.

Then, amidst this, the modern achievements of bridges and the like standing in all their contemporary glory, and I can’t help wondering if those who will come a few generations after us will see such developments not as we see them now, shiny and new, but crumbling and decayed as we now see the signal box of the past era.  Perhaps by then the car as a form of transport will be long gone, replaced by… well, who knows.  Teleportation?

And what will be the role of the Ramblers then?

But for now, we can be as absorbed by older buildings and remains as we are by giant weeds (at least I think it is a weed, but I know nothing of such matters, being a townie who has somehow found himself transported to this wonderful rural environment.  The agreement however seemed to be “weed”). 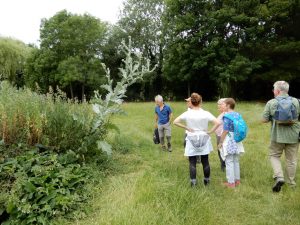 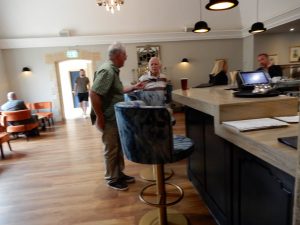 Such are the debates that we continue, not just on the walk but also in the hostelry at the end; a moment not just of refreshment but also of contemplating what we have just seen, and (at least for my part if no one else’s) what will my grandchildren see, if in 50 or so years they come walking by this way just to see what granddad was always raving on about.   It is an interesting speculation that occurs as I meander along with these wonderful new friends I’ve made.  It really is quite extraordinary how a simple decision, such as going along on a walk to see what this Rambling lark is all about, can have such a profound impact on one’s life.

The Lyddington walk in pictures

The walk from Houghton in pictures