And now (unless someone else had a camera and is about to supply me with more pictures, or as would seem more likely, corrections to my little narrative), we reach the final instalment which takes in not only the walk, but the extraordinary tale of what happened thereafter. 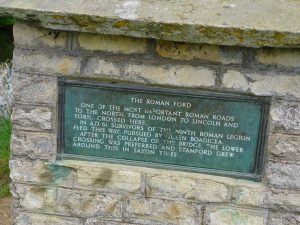 We saw the picture of the notice commemorating the Roman Ford, and now, above is one showing the full inscription.  It is as you can see important crossing in the history of England and the despatch of the 9th was one of Boadicea’s great accomplishments. 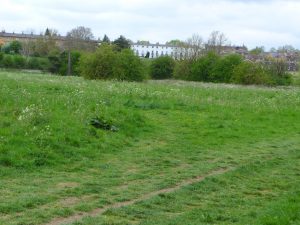 From here we walked on taking in the sites both close by and in the distance, and I must say, for me it is always a joy to see how people are willing and able to express their individuality both in their own villages and on their own houses.

For it always seems to me that for a while our country went through a period of repressing individuality, (demanding for example that all the houses had the same colour front door, for reasons that were never clear save when one discovered that one of the local councillors owned the only paint retail outlet in the town that stocked that particular approved shade of green).  It was a complete coincidence of course or indeed not for the first time I might have got the details wrong – thus I shall move on… 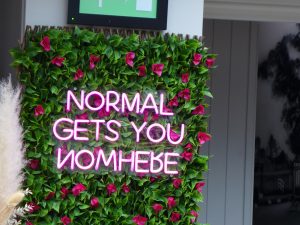 So we venture forth and inevitably reach the end of the prescribed tour, upon which most members of the ensemble quite reasonably discard the walking boots, return to their cars and drive off into the distance, to be seen once more the following Thursday or Sunday.

Except for a hardy few, who take a look around for a local house of good repute whereupon refreshments can be taken.

N0w I have begun to be a little suspicious as to what happens at this point for while everyone else always seems to know exactly where the resting place is, and can indicate its location with a vague wave of the hand, and talk of “second left, third right, past the church, and behind the stables” I do find it slightly more difficult to locate the exact domain.  And by the time I have changed my shoes, used by portable shower, phoned my children to tell them I am indeed safe, and then worked out how to start my car, the others have oft-times departed. 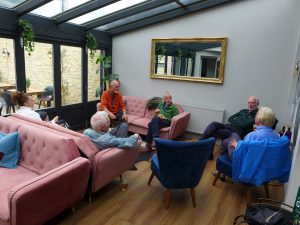 However on this occasion their attempts to hide from your truly were overcome by my clever ploy of visiting each and every place that sold restorative produce within five miles of the walk’s conclusion.  And thus  I managed to catch up with the ensemble settled in a most convivial resting place, pictured left.

And indeed, for reasons that will not become clear at this time, when I asked the gentleman on the door if a bunch of people had passed this way at speed looking as if they were endevouring to escape from a lost member of their party I was shown to a most amazing back room where all were paying attention to the wonderful murals upon the wall (which can’t be seen in the picture above, but can be witness via the image below). 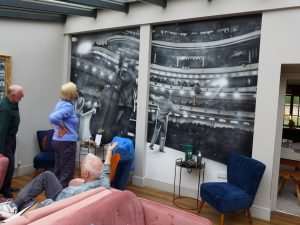 That’s me seated, waving my arm explaining exactly what is going on in the picture and why the artist or photographer (I can’t recall which) created it as she or he did.

Indeed I think it is helpful always to have an expert on the scene when faced with works of art, so I was glad to oblige.

And then, after a suitable amount of cultural conversation through which I was able to guide my fellow walkers, we were told we could indeed partake of food at this fine hostelry and thus we did.

It would be rather good if I could tell you the name of the esteemed public house / restaurant to which we repaired, but unfortunately, I’ve forgotten it.

But I can say a splendid time was had by all, and I am sure my fellow travellers will indeed add the missing details through a comment or two below.

If you fancy joining us next time for a post-perambulatory refreshment of a non-alcoholic (or even alcoholic) nature please do tag along.   I can’t guarantee that I’ll be able to find the way, but usually everyone else can.

I am now reliably informed by my carers that the pub was the Exeter Arms and Easton on the Hill. 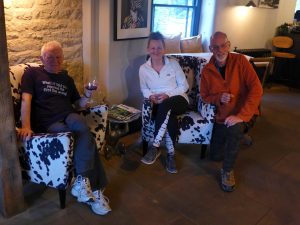 Fortheringhay 2: including Rosemary crisps, champagne on tap and a fantastic sunset”