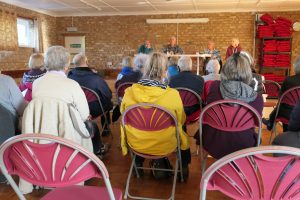 Barry Creamer welcomed everyone.  There were 28 members present.

The minutes had been circulated with the AGM papers.  They were accepted as a true record and there were no matters arising.

Barry’s report had also been previously circulated.  There were no questions.

Stewart’s report was also circulated with the AGM papers and included the announcement of his resignation from the committee.  There were no questions.

June’s report and the balance sheet were circulated with the AGM report.  She commented that the group is in a very sound position financially with nearly £600 in the bank.  The committee therefore responded  positively to an appeal from Ramblers Association HQ to forego our last quarterly payment.  There were no further question on the treasurer’s report.

Thanks were expressed to Tony for his work in setting up our own group website (www.peterboroughramblers.co.uk).

It was noted that Ramblers HQ has devised new logos which are individualised for each group.  We may use them from January 2022 but may continue using any documentation with the current logo.

Ramblers HQ are holding sessions for administrators of groups entries on the national website.  Hilary Lewis is due to attend one next week.

Barry welcomed Trevor to the AGM and the 50th celebrations of the group, founded by Trevor and friends in 1971.

Barry, Jane, Tony and Dawn have all said they were willing to carry on.  They were proposed by Hilary, seconded by June and unanimously re-elected.

There were no volunteers to fill the three vacant roles.  Barry advised members who might be interested in being Footpath Secretary or Treasurer that Stewart and June have both offered to mentor their successor.  June is willing to continue in the role until her replacement is found, but not indefinitely!  She is also willing to continue to collect and keep the risk assessment forms for three years after a walk.

Barry thanked the members mentioned in his report who are not on the committee but do much valuable work for the group.  These include Stan Dolby with the Thursday Walks co-ordination, Jean Mead on Sunday walks co-ordination (which she will continue to do after leaving the committee) and Hilary Lewis for maintaining the group’s page on the national Ramblers website and compiling the six-monthly walks programme booklet.

Barry also thanked June and Jean for organising the catering for the AGM, Joyce Rodriguez for taking on the organisation of the Christmas lunch in place of Josie Murray and Ann Creamer for her wonderful cake decoration of the two celebration cakes for the 50th anniversary. 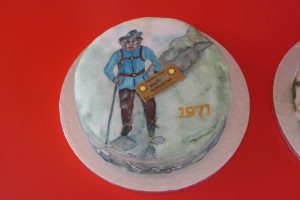 Barry informed the meeting that we are currently preparing a bullet point protocol.  Stewart has made a start on this.  Ramblers HQ is preparing a post-Covid check list and risk assessment which we will take into account; we do not know if they will also provide a laminated card version.

Hilary suggested that we produce the group’s own laminated card when the bullet points list is ready.

The committee had planned to hold map reading, walk leaders’ courses and had also been thinking about organising walks for a disadvantaged or disabled group.   The committee does not currently have the resources to progress these, so they are postponed for the moment.

Diane Simmonds suggested that other group members could offer their skills.  She herself has map reading skills, for example, which she could offer.  She suggested asking all Peterborough Group members, not just those who walk with the group, if they have the necessary skills and would be prepared to give their time to organising courses.

Dawn told the group that there are currently 163 members in the group, so only about one in six have attended the AGM and many do not join group walks.

Jane commented that she sends all emails out BCC to all members and would put this proposal in a future email.  It proved impossible to work out who the active members are; she regularly asks recipients to let her know if they know longer wish to receive them.  She received a request from a non-walking member to contact HQ as the only way of getting on to an online walk leaders’ course, so there definitely are active walkers who do not walk with the group.

The new risk assessment form was queried.  Barry explained that this is a requirement of the insurance company.  There was a brief discussion of the need to recce a walk every time, even when well-known. Jane commented that Ramblers HQ says that a recce may not always be possible, but a risk assessment can and must still be made with the help of previous knowledge and maps.

There was a consensus that most walk leaders regard a recce as essential in case conditions have changed, especially when there are extreme weather conditions.  The principle agreed by all was that the key elements required are common sense and safety awareness.

One member questioned the need to keep risk assessments for three years.  Jane said that this is designed in case someone sustains an injury which causes problems later.

June made a plea to all walk leaders to send risk assessments to her immediately after the walk.  Her details are on the form sent out recently.  Most people scan and email them.

Stan reported that Thursday walks are usually between 4.5 and 5.5 miles.

Jean says that Sunday walks are usually between 6 and 8 miles with a few longer walks when a walk leader is particularly keen to lead one.

Barry asked if there would be interest in starting Thursday walks in winter at 1pm instead of 1.30pm.  Stan said this has been tried before but members didn’t check the details and still turned up at 1.30pm.  He tries to keep winter walks shorter so that they finish before dark.  There was general agreement that it is confusing to have varying times and can mean having to leave home before a reasonable lunchtime to get to the start point.

Comments were also made that Thursday walks are very popular now and can take much longer if there are lots of stiles or if some people cannot keep up with the group.

Barry emphasised that the 30 limit was a recommendation, not mandatory, and that the walk leader’s discretion was final.  Booking is still essential.

There was a debate as to whether prospective new members should be accommodated even if they turned up unannounced at the start of walk.  Thoughts expressed were that all publicity makes it very clear that booking is essential; that it puts the walk leader in a difficult position if they have had to turn away members who tried to book in the required way because the walk was full; that the booking process must be clear to everyone however they book.  On the other hand, Ramblers HQ have urged us to welcome new members. No policy was not resolved at the meeting.

The question of booking via the Whatsapp group or in other ways was raised.  Some members prefer not to use Whatsapp and feel disadvantaged as they have to phone.  A possible solution proposed is to ask all walk leaders to provide their mobile and not a landline number.  This also enables prospective walkers to inform the leader if they are not able to attend at the last moment or to say they have a problem, whether or not they use Whatsapp.  It was noted that increasingly walk leaders are supplying a mobile phone number rather than a landline.

Hilary said that when compiling the walks programme she would prefer one phone number only to be supplied for each person in the booklet, whether as a walk leader or group organiser.  Jane said that an item already on the January committee meeting agenda is to scrutinise the booklet’s information items for inconsistencies such as this. 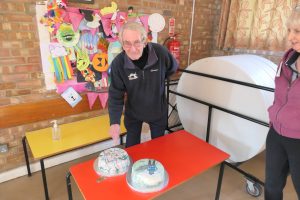 Stan asked that all walkers should show respect for walk leaders by not walking ahead of them.  It was suggested that walkers could be told that it would be considered that they had left the group if they got ahead unless the leader has specifically asked the group to go on ahead to a certain point.

Other members pointed out that the same applies to back markers.  No walker should get behind them.

Thanks to the committee

Hilary expressed thanks to the committee for steering the group through the pandemic and enabling it to thrive.  Jane said that Geoff Church had expressed the same thought when he gave his apologies.

The meeting ended at 12.20 and was followed by a delicious buffet lunch and the celebratory cake mentioned above.

The walk from Houghton in pictures

The Wadenhoe Walk in words and pictures

More pictuers from the Christmas meal 2021