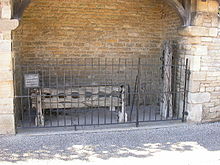 It is always great fun to begin a walk with a good bit of crime and punishment and the Northamptonshire village of Apethorpe does itself proud in this regard.  For we parked up and began our tour at the stocks and whipping post.

This caused a certain amount of interest among certain members of the party who were quickly despatched to the back of the ensemble as we headed out of Apethorpe and started on our amble in the amiable countryside.

However as we moved on I was indeed struck by the fact that it is now necessary to keep enthusiasts out of the whipping post area, suggesting that maybe Apelthorpe is not one of those villages one would want to visit after dark. 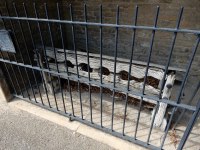 But we did not leave fast enough to stop one of our enthusiastic photographers had taken another shot of the whipping post and stocks.  I chose to move hurriedly on, but each to their own, of course.

According to the records Apethorpe had 160 residents in 2011, a 23% increase over the last ten years.  By my reckoning, at this rate it will be the largest conurbation in the country by 2359.

But looking backwards, as we must, this is a manor recorded in the Domesday Book of 1086 where it was called Patorp and we were soon informed that Rowan Atkinson had also lived in these parts. 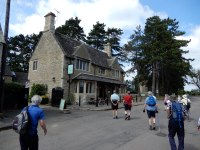 But autograph hunters among us were forced to return autograph books to pockets as we discovered that not only was it not his habit to chat to passing walkers, he also didn’t live here anymore.  Rather like Alice in the 1974 comedy.

The village today is compact, uniform and centred on Main Street. In the late 15th century the manor of Apethorpe was acquired by Sir Guy Wolston, an officer in the household of King Edward IV, who began the construction of the still surviving Apethorpe Palace. 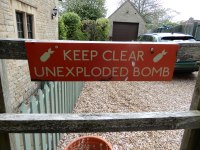 calm and peaceful village that one might imagine as one starts out.   And one should not think of the villagers as cowering away either from the dangers inherent in the Northants countryside, nor the whipping post of prowling lords and associated nobility.

For as we can see in the picture opposite, unexploded munitions don’t stop the locals parking a car within the zone of the potential explosion.  (Car insurance within the village must be rather expensive).

I did subsequently try for an interview with the insurance company on the issue potential losses of car and house, but they didn’t want to speak to me. 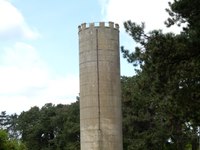 What we did find however was that towers are also popular (alongside the unexploded bombs) and thus crowds can gather to admire such constructions.  This one (the tower that is, not the crowd) was apparently built by Richard III in the 9th century (although I may have got that slightly wrong as I spilled some coffee onto my notebook during a latter part of the journey and I can’t quite read all my writing. 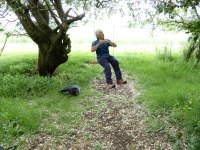 But as ever with a Peterborough Ramble there was much merriment to be had as we passed along the way.

Now with this picture below, you may perceive that our valiant group member has perfected the ancient art of levitation – an artform to which (I was informed by historians in the group) a whole chapter of the Domesday book is devoted.  That was something I never knew and is indeed one of the many things that I have learned since being a member of Peterborough Ramblers. 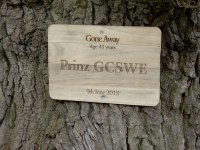 However, there are moments of sadness too as the plaintive memorial upon a tree that we passed (photographed below) revealed.

From what I have learned of the village, I suspect the departed trod on a leftover second-hand car dump, although to be fair there were no signs of such a thing.

But of course, these are often moments of sadness as our mortality is recognised, and there was indeed much debate on the walk as to the meaning of the plaque.

Unfortunately, I wasn’t paying attention at the time so until someone reminds me, I’ll have to let this pass.

However one need not worry for there are always more trees, cottages and walls to consider, many of them constructed and remaining without any mysterious notices whatsoever, which for myself, 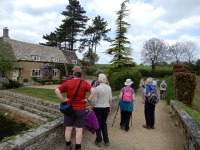 as your eternally vigilant intrepid guide, does of course make my life a lot easier.

There are many more pictures and interesting photographic evidence that I could also include here but I do appreciate how incredibly exciting these portrayals of our walks can be, and am mindful of the physical and mental well-being of my readers.  Thus I shall pause here and allow you time to recover before venturing into another report of things past, future and imaginary.

Whichever it is, I hope that I am able to bring to you a taste of just how diverse and relaxed our groups are as we meander the countryside each Thursday afternoon. 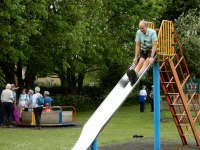 And such thoughts of history, churches and children’s playgrounds are most certainly not all that we consider during our walks for there is always more to do, enjoy, and discuss.

But to pause for a moment on the question of the playground, what I have noticed is that there are those on our walks who are slidesmen and women and those who are roundabouters.  And those of course who are far too sensible for such ventures. 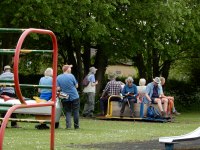 (I of course put myself firmly in the latter group.)

At a break some will take time in discussion and some will admire the activities of others.  We cater for all tastes.

But ultimately even the time for refreshment must come to an end and we venture on, taking in everything that we see.  And if I may add a personal word here, having been part of this wonderful group of people for just a couple of years, I genuinely feel a walk with these friends is unlike any other walk I have ever taken.  If  you are reading this (as you obviously are otherwise you wouldn’t be) and you are not a member of Peterborough Ramblers I do hope you might consider joining us.  Most members are far more sensible (not to say both more coherent and more literate) than I am.  There are more details on the home page.

If you have been, thank you for reading.  If not, you could always start again. 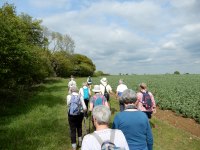 More pictuers from the Christmas meal 2021