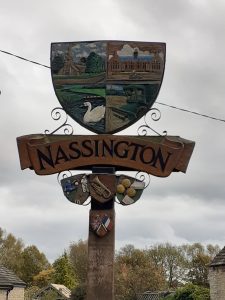 Nassington is a pleasant village situated on the Wansford to Fotheringhay road with several footpaths in all directions, giving the opportunity for a variety of different walks.

On 11 November, twenty eight of us set off SE across fields in the direction of Elton. We crossed a dismantled section of the Peterborough to Oundle railway before arriving at the River Nene, accompanied by light rain (not forecast!).

The substantial wooden bridge over the river had been closed to use for a number of years, deemed to be unsafe. However as I had discovered on my recce, there is a new metal bridge now in place with non-slip surfaces on the deck and steps. Fortunately this meant that we did not need to use the diversion which is normally quite muddy in part.

We turned North before Elton, following the route of the Nene, before entering what had been RAF Sibson at its SE corner. There is still a brick structure in place there which was possibly a control of entry / guard-post.

Sibson airfield is now a parachute centre but during WW2 it was used as a site for pilot training. The grass strip is to the east of the Wansford road and the area we were walking has been returned to farmland. Two large depressions in the fields short of the runway can be seen, likely craters from when the airfield was bombed. 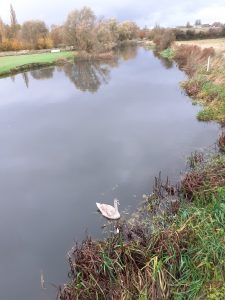 We progress and come upon three Stanton air raid shelters and a possible guardhouse located on what was the western perimeter of the airfield.

Reaching a branch of the Nene, we cross via another sturdy bridge which has had a slip proof surface fitted to the deck. We have joined the Nene Way LDFP for a short distance and soon cross the main river, again with another new slip proof surface.

Somebody has been spending some money, good for them! Back to Nassington for 15.30ish, an easy five mile walk with only one stile!

The Bourne Walk in pictures